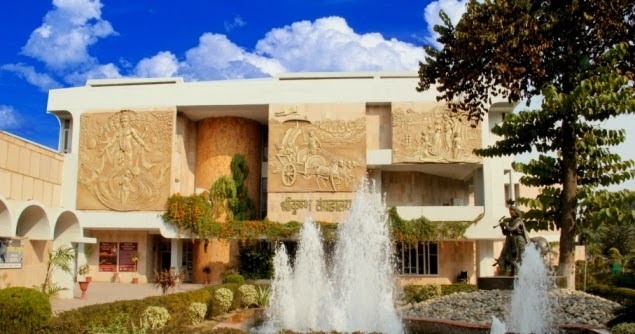 SRIKRISHNA MUSEUM, KURUKSHETRA
Krishna, the embodiment of intellectual and spiritual glory has been a subject of adoration ever since the character got deified as a God. His versatile personality made him a deity. Unfolding the mystery of Krishna is virtually an enchanting experience as every time you untwine the fabric of Krishna you discover a new dimension in it. The divinity and human aspect o...f Krishna as revealed by his character in the literature is unparalleled in the history of human civilisation. He has been a source of perennial inspiration to the art and literature. He is the most popular character in Indian myths and legends.

Every museum has its own character and personality. With a view to awakening the people morally and culturally through the ideas and ideals of Krishna and to enlighten the people the history of the region, the Srikrishna Museum was established in 1987 by Kurukshetra Development Board. By establishing this museum Bharat Ratna Sh. Gulzarilal Nanda’s dreams were realized as Nanda ji, the founder Chairman of Kurukshetra Development Board was longing for a museum in Kurukshetra which can showcase spiritual and cultural heritage of the nation. Subsequently it was shifted to the present building in 1991 and new block was added in the year 1995. Further in the year 2012 a Multimedia Mahabharata & Gita Gallery was created in third museum building. The theme of the museum is Krishna, Kurukshetra and Mahabharata.

At present houses nine galleries spread over the three buildings which display the artifacts representing Krishna as godhead, an incarnation of Vishnu, a great Philosopher, an epic hero, an astute statesman and a supreme lover. The personality and teachings of Krishna have permeated into the national ethos and his exploits and miracles are a source of inspiration for the artistic expressions manifested in all parts of the country in their traditional folk and classical art forms.

Posted by SRIKRISHNA MUSEUM, KURUKSHETRA at 01:30 No comments:

Translate, watch this site in your language